The “me too” movement online is a big eye opener to the world. Women all over the world has been putting these words in their Facebook statuses and twitter to show that them too has experienced sexual harassment and/or violence. It’s scary to see the magnitude of the problem. I hope this leads to a discussion of this HUGE problem that women experience daily. It shouldn’t be too hard to treat each other respectfully?

I have been working in a man dominated field my whole life and I could write a book about this subject. I have way too many examples of sexual harassment. I will share my first experience of harassment in the work field. This was absolutely not the first harassment in my life as in school girls in my class were constantly called “hore” or worse. It was a daily thing and nobody reacted. We were sad but no teachers ever took it serious. “Boy will be boys right”. NO, they fucking wouldn’t, if parents, teachers would start reacting and not making this a boy-thing. If I as a little girl would call my girlfriend in school the same word I can bet my right leg it would be a different reaction as “girls shouldnt talk like that”.

I was 18 years old and had started working at a big international company straight after school while I would somehow figure out what I wanted in life. I ended up in a department right next to the warehouse. All guys. Most were awesome guys that I’m still friends with. But some idiots. One day I was sitting by my desk working with administration. A colleague walks in. He was much older than me, probably in his 40s at the time. I was wetting my finger with every page I turned not to have the paper stuck to each other. He leaned over and said “why don’t you just stick that finger up your pussy and that I can assure you would get it wet”. All the guys in the room started laughing. I was shocked and so angry and yelled back “excuse me what did you say?”. Even if I was 18 years old I never took any shit. It didn’t mean I never got any. I got loads but I didn’t let it go. He just laughed and said got to go, meeting x (one of our biggest clients) to show them around our warehouse”. I saw red just like the color of my face. My whole body was shaking. Should he just leave now and get away with this? The adrenaline was pumping. I was so angry I wanted to cry. How could he humiliate me like that? What have I ever done to him? Answer was nothing. The only thing I “had done” was being a human with a vagina.

I left my desk and walked fast out to the warehouse. I had to walk around the whole mega building to get to his little office but I walked like I was freakin Forrest Gump and nothing would stop me. I walked up to his office and opened the door where he and three people from our client sat down and had a meeting. He was surprised to see me but said “Hello, we are little bit busy can you leave us please”. In a tone like nothing ever happened. Like a mature director voice from a dad of three pretending that he just didn’t comment on my private parts. The client recognized me and said hello as well. I didn’t leave. I stood in the door and said three times “what did you say to me before?”. Every time I asked he said “Not now please, we are busy”. I said , knowing I might get fired for this, you just told me to reach down to my pussy to wet my fingers, is that correct? He looked at me like he wanted to kill me. The people from the client was shocked and didn’t know where to look. The room was dead quiet. I said “don’t you ever….ever talk to me again that way. I hope we are clear.”

Boom closed the door and walked off.

And got shit scared. My heart was pounding  like a drum. I was angry and sad at the same time. Still asking myself why he would say something like that to me. I was disappointed.

But nothing happened. He never mentioned it again and apparently not to any of our managers either as I didn’t hear about it. We continued working together and I know he talked about me behind my back but I think he knew that I would make a bigger deal out of it if I heard him mentioning the subject once again. So he stayed quiet. I think he was shocked that the new,  young girl in the office had the courage to speak up. I think it scared the shit out of him. And I continued scaring the shit out of guys that thought I would let comments go and hasn’t stopped since. The above is just one example. Unfortunately I have many more. Sometimes I get tired. But I will never be quiet and I will always question. I will never just accept. I’m raising a girl and God knows I will teach her to be ruthless just like her mum. It’s so hard to speak up and you will always be questioned or labeled as “difficult”. I always wonder if guys like in my example ever think of how they would react if their daughter, girlfriend, mother or friend would be treated the same way.

Remember the people that appreciate you speaking up, women and men, are always the majority. They might not make the most noice but they are there. Let’s hope the #metoo movement has made them braver and the noisy ones can stay in their caves and scratch each other’s balls. 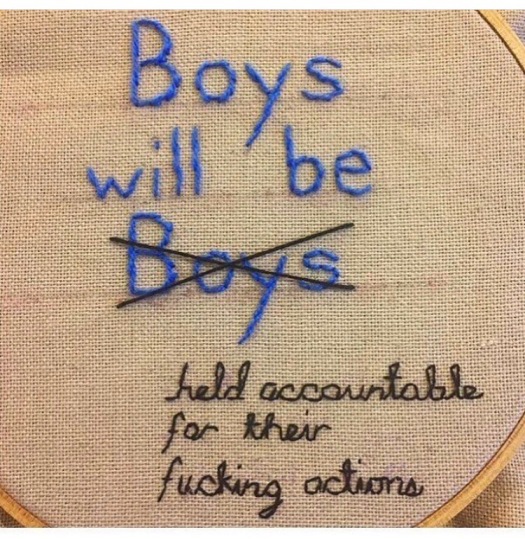